Multiple Sclerosis [Multiple Sclerosis (MS)] is a chronic disease of the Central Nervous System characterized by demyelinating lesions. Typical course is alternating of acute phases followed by unpredictable periods of remission but, usually, with a progressive loss of sensori-motor functions. A multifactorial pathogenesis is nowadays accepted [1] even if a unique final autoimmune mechanism is usually considered. Mèniére Disease [Mèniére Disease (MD)] is a disorder of the inner ear characterized by acute spells of vertigo, tinnitus and hearing loss followed by unpredictable period of remission but, usually, with a progressive loss of vestibular and cochlear function. A multifactorial pathogenesis is accepted [2] even if an unique final hydraulic mechanism, the so called Endolymphatic Hydrops [Endolymphatic Hydrops (EH)], is usually considered [3]. Both MS [4,5,6] and MD [7,8,9] presents quite the same frequence of cerebro-cervical venous abnormalities as evaluated by means of Magnetic Resonance Venography [Magnetic Resonance Venography (MRV)] or ecoDuplex exam [eco-Duplex (ECD)] adopting the criteria for the diagnosis of chronic cerebro-spinal insufficiency [chronic cerebro-spinal insufficiency (CCSVI)][10]. Despite this, as far as Author’s knowledge concern, no patients affected with MS and MD are reported in Literature.
The aim of this paper is to investigate if MS and MD present CCSVI different patterns.

Three groups of patients were enrolled:
70 definite Multiple Sclerosis (MS, 43 females and 17 males, mean age 43,7 yy) –
27 definite unilateral Ménière Disease [13] (MEN, 17 females and 10 males, mean age 41,5 yy) [11]
51 Other Vestibular Disorders (OVD, 28 females and 13 males, mean age 43, 3 yy) [12].
Multiple Sclerosis diagnosis was performed by a trained neurologist (ML). Diagnosis of MEN or OVD was based on clinical and audio-vestibular investigation by the same audiologist (MV) that was unaware of the MRV and ECD results. The exclusion criteria comprised, for all three groups of patients: retro cochlear lesion or other known anatomic/structural lesions of the ear, temporal bone or head trauma, syndromic features or congenital otological abnormalities. Furthermore in MEN and OVD groups any known central nervous system disease.
The work was carried out in accordance with the Declaration of Helsinki, including, but not limited to there being no potential harm to participants, guaranteed anonymity of participants, and informed consent.
All subjects underwent magnetic resonance imaging (MRI) of the brain during which contrast enhanced imaging of the venous cerebro cervical system was also performed in order to assess the condition of the IJVs and vertebral veins (VVs) and evaluated by the same neuroradiologist (CP) who had no knowledge of the clinical diagnosis. MRI was performed using a 1.5 T scanner with a standardized imaging protocol consisting of axial and coronal fast spin-echo T2-weighted imaging and axial and sagittal spin-echo T1-weighted imaging. The intracranial and cervical venous systems were investigated using computer-based magnetic resonance venography (MRV) performed in three standard orientations (transverse, coronal, and sagittal). A maximum-intensity projection (MIP) algorithm was used to display three-dimensional MRV reconstruction angiograms. The subjects underwent contrast-enhanced MRV in the supine position and the right and left cross-sectional areas (CSAs) of the IJVs and VVs were compared. Asymmetrical venous flow in the IJVs and VVs was functionally investigated using venous Duplex (ECD) (randomly carried out by Esaote or General Electric with the similar probes and settings), by a well-trained specialists (BPM), that was unaware of the clinical diagnosis but not of the MRV findings. Duplex was performed at 0° and 90° according to the CCSVI protocol and was considered confirmation of MRV findings when at least two of the five CCSVI criteria were satisfied. [13]
For the purposes of the paper only patients that satisfied CCSVI diagnostic criteria both by MRV and ECD were considered. Between-group comparisons were made using analysis of variance (ANOVA). Frequencies were compared using the Chi-squared and p value of < 0.05 was considered to be statistically significant. The statistical analysis was carried out with Statistics 6.1 software (Stat. Soft Inc., Tulsa, OK, USA) by an independent well-trained audiologist.(DF)

Fig. 1 clearly shows the different pattern of topographic segments alterations distribution into the three groups with prevalence of the anatomic alterations (ST+AT) in J1 in MS and in J3 in MEN. 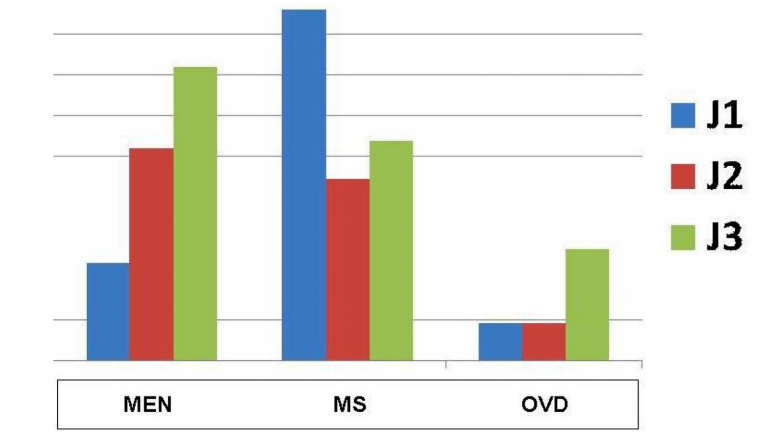 Fig 2 Distribution of IJVs anatomic alterations (ST+ AT) in relationship with topographic segments. It is clear how IJVs alterations are substantially rare in OVD and, especially, how in MS J1 alterations are more represented while J3 is the “specific” MEN abnormal segment 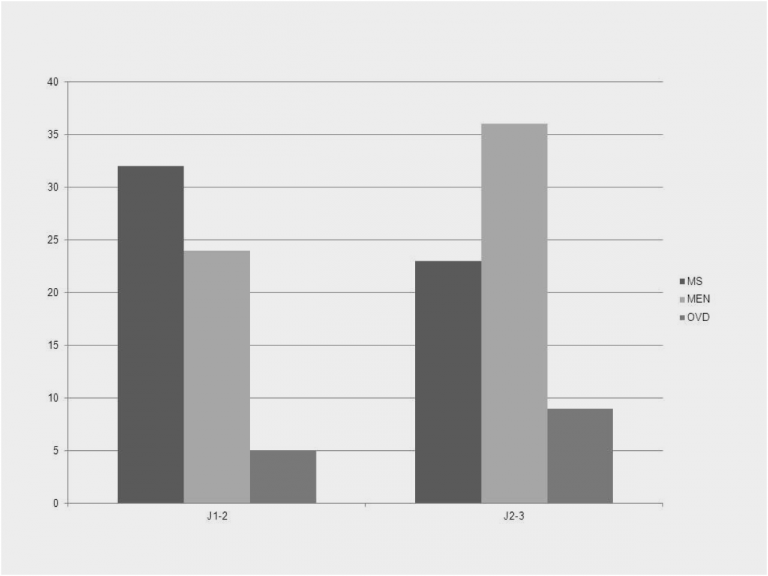 Our results clearly show that CCSVI may be considered as a typical condition both in MS and MD but is substantially rare in no-Méniere audio-vestibular disorders.

If CCSVI may be considered a cause per se or the anatomical condition for triggering the effect of other factors may be debated. Anyway, our experience point out that CCSVI is not a unique disorder and that the venous abnormalities pattern might be disease specific. MS is a typical demyelinating disease but demyelination of the vestibular nerve has been described in patients affected with MD, too [14]. Although the hydraulic mechanism of EH is substantially worldwide accepted, there are evidence of MD patients without EH [15] and EH without MD symptoms [16] and Gacek [17] proposed a neuropathic viral mechanism in MD pathogenesis.
May CCSVI, that is considered to be correlated to MS Central Nervous System demyelination, to be connectable to vestibular nerve demyelination in MD, too? It is difficult to answer but our experience highlights the fact that in MD patients IJVs alterations regard the proximal segment.
Anyway, CCSVI pattern seems to be substantially different in MS and in MD.
Our results indicates that the MS pattern is characterized by J1 stenosis, J2 alterations trunk, a prevalence of J1-2 medio-distal alterations, compensatory collaterals besides vertebral venous system. On the other hand, MEN pattern is characterized by alteration trunks in J3, a prevalence of J3-2 medio-proximal alterations and vertebral venous hypertrophy without other detectable collaterals.
On the other hand the role of the origin of the IJVs, that to say the jugular bulb [jugular bulb (JB)] in Ménière Disease is known. [18]
Several studies analyzing the temporal bone imaging [19] or anatomy in MD patients have found consistent alterations in the arrangement of the sigmoid sinus, anteriorly or medially displaced, and JB abnormalities. According to Redfern et al. [20] and Park et al. [21] there is a higher frequency of JB abnormalities in patients with MD than in patients without inner ear symptoms, particularly, the mediolateral and anteroposterior position of the jugular bulb determines encroachment of the surrounding structures. Authors postulated that abnormal position contributes to MD development and that temporal bones of MD patients might be constituted anatomically different, carrying predisposing factors for the development of clinically apparent MD. These findings resemble to our findings: IJVs in general and J3 alterations are significantly highest in MD than in OVD.
The disease-specificity of venous abnormalities has been recently reported also by Vannini et al. [ 22 ] that described different morphology of IJVs’ valves in MD patients with respect to Normals and Sudden Neurosensorial Hearing Loss (SNHL) patients.
It is interesting to note that Burcon [23] observed in MD patients frequent involvement of the upper cervical spine dysfunction, particularly C1 and C2, that the author correlated to vertigo, C1, and hearing loss, C2. It is interesting to underline that in OVD VVs hypertrophy is highly represented than J1-J2 alterations (5%) but similarly to J3 abnormalities: VVs 15% -J3 14%. Both Vertebral Veins and proximal Jugular segment are anatomically placed in C1-C2 region and this fact support the role of upper cervical venous drainage to explain Burcon’s paper. Furthermore, Franz et al [24] postulated a cervicogenic disorder, mainly trigeminal based mechanism, as forerunner of MD. Also in this case a venous explantion might be coupled to Franz’s trigeminal mechanism as happens in migraine patients. [25]
The key point of the paper of Merchant et al [16] conducted on temporal bone cases with a clinical diagnosis of MD or a histopathologic EH diagnosis, is that hydrops per se is not the cause of MD while there are evidences of cellular and molecular bases of the various MD symptoms [11].
Thus, a specific anatomical abnormality of the temporal bone, regarding the jugular bulb, and/or the highest portion of the cerebro-cervical venous drainage system, CCSVI as shown in this paper through MRV and ECD, may lead to abnormal clearance of audio-vestibular structures inducing citochemical changement similar to those observed in MS CCSVI positive patients.
It is interesting to reveal that, although the group of patients with venous alterations is very small, OVD patients show a CCSVI pattern more similar to MD than MS pattern, thus it is reasonable to conclude that CCSVI is not an unique entity and that neurological (MS) pattern is distinguishable from the audiologic (MD and OVD) pattern. In Author’s opinion this explains the fact that no patients affected with MS and MD are reported. in Literature.