3–10 However, for the majority of patients an aetiological factor is not identified. The results of SSHL treatment are still largely unpredictable; a huge variability in responses has been reported ranging from no response to total recovery.(11)
However, the latest reports comparing different therapies have shown a pure-tone threshold (PTA) improvement of approximately 30 dB in responders with an initial PTA of 50–60 dB.12 Chronic venous cerebrospinal insufficiency (CCSVI) was initially described as being strongly associated with multiple sclerosis (MS).13 It is a syndrome characterized by stenosis of the internal jugular veins (IJVs) and/or azygous vein with opening of collaterals and insufficient drainage.
14 – 16 We report a case of bilateral SSHL with vertigo, showing evidence of the CCSVI pattern but not associated with MS. To the best of the authors’ knowledge, this kind of association has never been reported.

Case report
In 2010, a 56-year-old woman came to our observation for an SSHL in the right ear associated with aspecific dizziness and lightheadedness. In 2003, without any previous history of hearing difficulties, the patient had experienced an episode of SSHL in the left ear. In both episodes, there was no prior history of temporal bone fracture, meningitis, autoimmune disease or exposure to ototoxic drugs.
General and neurological evaluations were normal; extensive blood tests including liver function tests, complete blood count, urea nitrogen, creatinine, erythrocyte sedimentation rate, circulating immune complex and serum electrolytes all gave normal results. Antinuclear antibody, rheumatoid factor, C reactive protein, HIV and Venereal Disease Research Laboratory tests were unremarkable as were clotting
tests. A transthoracic echocardiogramand an electrocardiogram showed no abnormalities.
Audiometric testing, performed on admission, showed sensorineural hearing loss with a PTA at 500–1000–2000 Hz at 55 dB with 90% speech discrimination
in the left ear and PTA 45 dB with 95% speech discrimination in the right ear. Stapedial reflex thresholds at multiple frequencies were normal on both sides.
Normal waveform responses were evoked bilaterally on brain stem auditory evoked potentials.
Electronystagmography showed hypoexcitability (more than 22% asymmetry in our laboratory) to caloric stimulation on the left side. There were no abnormalities in saccades, pursuit or optokinetic nystagmus. Magnetic resonance imaging of the
brain, including diffusion images, was normal for a subject of this age.
The echo-colour Doppler for assessing cerebral venous return, according to the protocol of Zamboni et al.,17 showed an abnormal cerebral venous deficiency. A type B pattern characterized by significant stenoses of both IJVs and of the proximal azygous was observed. (Figure 1) Abnormal reflux of the vertebral veins and bilateral stenosis of the brachiocefalic junction were also detected. 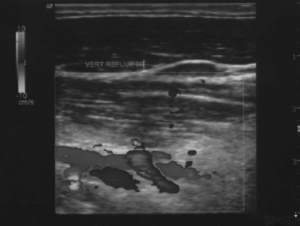 The problem we observed concerning the IJVs appeared to consist mainly of a malfunction of the valve leaflets that usually allow the correct outflow of the venous bloodstream and impede backstream. In both cases the leaflets appeared to have a reduced motility and, de facto, caused a stenosis of the vessel lumen. Secondly, the reflux of the vertebral vein system was quite evident, especially when the examination was performed in the upright position, since there was a poor outflow into the azygos venous system.
The patient was treated with systemic steroid, hyperbaric oxygen and platelet aggregation inhibitor 11 and an improvement of 35 dB of PTA was obtained in the right ear after 15 days. No modifications were observed in the left ear.

Discussion.
In 2007, Shim et al.18 presented a case of unilateral profound sensorineural hearing loss due to a venous malformation of the internal auditory canal. As expected, no malformations of the internal auditory canals were detected in our patient and therefore we had to focus on the possible effects of CCSVI on the outflow of the inner ear, that is completely drained by the vein of the cochlear aqueduct.
19 In fact, the common modiolar vein enters the bony channel immediately adjacent to the aqueduct to become the vein of the cochlear aqueduct which in turn drains via the inferior petrous sinus into the IJVs. Injury or occlusion of this vessel
would be particularly significant since it is widely believed to provide virtually the entire venous drainage of the cochlea.15,20 The cochlear aqueduct and the internal auditory canal communicate with the subarachnoidal space; in the guinea pig model, an occlusion of the veins of the cochlear aqueduct results in an increase of perilympatic endolymphatic pressure, a decrease of cochlear blood flow and
endolymphatic potential.
21Furthermore, since many of the venous vessels in the scala tympani have little or no bony covering and are essentially exposed to the perilymphatic space, the venous system is a route of entry for the cells participating in the inner ear inflammatory process.
22 Another interesting point is that the blood leaves the brain by using the back propulsion of the residual arterial pressure (vis a tergo), complemented by anterograde respiratory mechanisms (vis a fronte).1,2,4 – 7 The latter consist of the thoracic pump increased venous outflow during inspiration: the increase of negative thoracic pressure improves the aspiration of blood toward the right atrium. In addition to vis a tergo and vis a fronte, postural mechanisms play a fundamental role in ensuring a correct cerebral venous return. Several ultrasound studies of healthy volunteers have demonstrated that the pattern of cerebral venous drainage
changes, even under physiological conditions,
depending on the body position.
1,2,4 – 7 In the prone or supine position, the outflow through the IJVs is favoured, whereas passing to the upright position transfers most of the encephalic drainage to the vertebral veins.
1,4 – 7 On the basis of these considerations, it would be interesting to study the CCSVI in certain cases of bilateral SSHL following general anaesthesia for non-otological surgery involving the use of cardiopolmunary bypass of unknown origin23 since the CCSVI might explain the anatomical background which provides a predisposing factor for SSHL.
Further studies are needed to verify whether this observation is causal or coincidental.

← “CCSVI, a Long and Winding Road”.
Risk of Thromboembolism in Patients Suffering from Multiple Sclerosis. →